PEAT can work with most modern browsers, including recent versions of Internet Explorer, Firefox and Chrome. However PEAT does not work properly in Windows Vista with browsers that have been configured to use Direct2D to render web pages (the browser window content area will not be captured properly).

While Firefox can also be configured to use Direct2D, Internet Explorer 9 seems to be the most aggressive about automatically enabling this level of hardware acceleration. If you are using PEAT with Internet Explorer 9 in Windows Vista, and PEAT doesn’t properly capture the content area of the browser window, you can try disabling GPU rendering (it’s the first item on the “Advanced” tab in “Internet Options”).

Please note that in Windows 7, PEAT works fine with Internet Explorer 9 even with GPU rendering enabled. However, PEAT only works with Firefox in Windows 10.

If you have questions or feedback related to this software, please contact us or send us an email at trace-info@umd.edu.

The Trace Center’s Photosensitive Epilepsy Analysis Tool (PEAT) assists developers in identifying content on their sites that may induce seizures in people with photosensitive seizure disorders. PEAT captures a recording of web content or software and evaluates it for sequences of luminance flashes and red flashes that are known to provoke seizures in people who are photosensitive. The evaluation used by PEAT is based on an analysis engine developed specifically for web and computer applications by the University of Wisconsin’s Trace Center, working with Cambridge Research Systems UK and Dr. Graham Harding.

PEAT is designed as a free, downloadable resource for web developers to identify seizure risks in their web content and software. It is NOT designed to analyze commercial videos or games, to remove epilepsy risks, or for day-to-day web site screening by a person with photosensitive epilepsy. It also cannot make unsafe videos safe (but others can use it to figure out how to make small changes in their content to make it safe). Visit the Cambridge Research Systems HardingFPA site for more information on commercial analysis tools.

To analyze your web site for seizure risks, use PEAT to capture a video of your web site in action. Then run an analysis to determine the seizure risks and places where the content could be modified to remove the high risk spots. The analysis engine will provide a report detailing the type, frequency, and severity of failures.

IMPORTANT NOTE: Many older computers are not able to capture video. Generally, a dual core processor is needed. Refer to System Requirements for details.

This manual introduces you to PEAT through the following 11 sections:

This section provides detailed information about the controls on the PEAT interface. 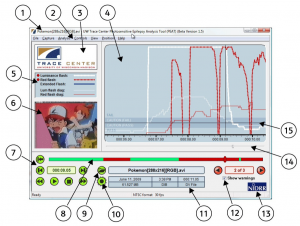 The numbers in this image of the PEAT screen match the items in the following description:

IMPORTANT NOTE: Many older computers are not able to capture video. Generally, a dual core processor is needed. Refer to Section 10. System Requirements for details.

Before you analyze a web site, you need to record a video clip of how your web site looks in action. To do this, turn on PEAT’s capture tool and navigate through your site as a user normally would. The tool will record the web site and your actions, so that you can replay it and analyze it in PEAT.

If you already have a recording of your web content in the correct format (see Section 9. Video Requirements) and want to open it in PEAT (see Section 3. Opening a Video Clip). If you have a video clip that does not open in PEAT, you may be able to open it in a browser and record it using this method. However, certain types of media content, such as some online videos that require additional browser plug-ins, may not be compatible with the recording software. See Section 9. Video Requirements for details.

To capture a video clip of your web content:

This section describes how to open an existing captured video clip in PEAT. The clip must meet the Video Requirements (see Section 9 for details). If your video does not meet these requirements or does not open, you may be able to open it in a browser and Capture a Video Clip. However, certain types of media content, such as some online videos that require additional browser plug-ins, may not be compatible with the PEAT capture software. Refer to Video Requirements for details.

To open a video clip:

Note: The size of the viewing window in PEAT (#6 in the image at the beginning of this document) does NOT affect the size of the video being analyzed. This is just resizable for your convenience.

This section describes how to play a recorded video clip in PEAT. This does not perform any evaluation or analysis on the video – to do that, see Section 5. Analyzing a video clip.

To play a video clip: 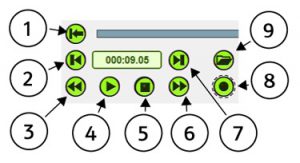 The numbers in this image of the on-screen video controls match the items in the following list of video control functions:

Note: Some browser media players are not compatible with PEAT’s capture tool. If a portion of your web site appears as a black rectangle rather than the desired content, it cannot be analyzed with PEAT. Refer to Video Requirements for details.

This section describes how to use PEAT to analyze a recording of web content and create a report of details about its epilepsy risks.

Note: Not all web content needs to be analyzed. See Section 8. How Seizure Risk is Determined for details on which types of media clips are most and least likely to be problematic.

To analyze a video:

This section describes how to read and understand the results of PEAT’s analysis.

This section describes how to view and print a report of your web content’s seizure risks.

You can also select File->Save HTML Report to save a report of the test results to an HTML file. This file can then be viewed and printed with your web browser.

8. How Seizure Risk is Determined

Photosensitive seizures can be provoked by certain types of flashing in web or computer content, including mouseovers that cause large areas of the screen to rapidly flash on and off repeatedly. Hazardous, seizure-inducing content has been inadvertently broadcast on television in the past, causing mass seizures in children. As web content becomes more dynamic and media-rich, it is important to prevent similar problems.

To minimize the risk of visually induced seizures, web designers and computer software developers should become familiar with the triggers of photosensitive disorder seizures. Content to consider includes bright and rapid flashes, especially red flash, and some spatial patterns. The Web Content Accessibility Guidelines 2.0(link is external) provides recommendations for using these forms of content safely. These guidelines include restrictions related to frequency, luminance, area and color of any flashing.

In general, web or computer content will not provoke seizures if either of the following is true:

Note: The current working definition in the field for “pair of opposing transitions involving a saturated red” is where, for either or both states involved in each transition, R/(R+ G + B) >= 0.8, and the change in the value of (R-G-B)x320 is > 20 (negative values of (R-G-B)x320 are set to zero) for both transitions. R, G, B values range from 0-1 as specified in the relative luminance definition.

The “^” character is the exponentiation operator.

Note: Not all web content needs to be analyzed. Refer to How Seizure Risk is Determined for more information.

To run PEAT (including PEAT’s capture tool) these are the minimum requirements:

In our testing, we have found that the minimum processor requirements are somewhat dependent on other components in the system. For example:

Note: If you are running the PEAT capture tool on a Windows XP system, the client area of the captured window needs to be entirely visible for the entire capture time (e.g. no part of the active captured window should be behind any other window, and no part of it should be off screen). These restrictions do not apply when capturing on a Windows Vista or Windows 7 system.

PEAT can be operated entirely from the keyboard using the following keyboard shortcuts (plus the Alt key and the arrow keys to access a few infrequently invoked items via the menus):