Dr. Jonathan Lazar was named the winner of the 2020 ACM SIGACCESS Award (Special Interest Groups on Accessible Computing) for Outstanding Contributions to Computing and Accessibility. It is the highest award given by ACM SIGACCESS. 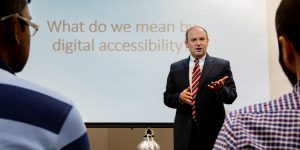 Dr. Jonathan Lazar, recipient of the ACM SIGACCESS Award for Outstanding Contributions to Computing and Accessibility, pictured lecturing on digital accessibility at the UMD iSchool (photo by Craig Taylor)

Jonathan Lazar, PhD, LLM is a professor in the College of Information Studies (iSchool) at the University of Maryland, where he is Associate Director of the Trace Center, and core faculty in the Human-Computer Interaction Lab (HCIL). From 1999 to 2018 he was a professor of computer and information sciences at Towson University, where he founded the Universal Usability Lab in 2003 and he also served as director of the information systems program for 14 years. Over more than two decades, Professor Lazar has been a tireless advocate for digital accessibility. His contributions span extensive research, practice, education, advocacy, policy and legal work.

He has published extensive research involving interface accessibility, primarily about Blind users and users with Down Syndrome (over 170 peer-reviewed articles and chapters). He also introduced thousands of researchers to how to respectfully conduct research involving people with disabilities through his chapter on “Working with Research Participants with Disabilities” in his Research Methods in Human-Computer Interaction textbook (2nd edition, co-authored with Heidi Feng and Harry Hochheiser). He has not only published in HCI and accessibility outlets, but also in legal journals and has also published two books at the intersection of HCI and law: Ensuring Digital Accessibility Through Process and Policy (co-authored with Dan Goldstein and Anne Taylor), and Disability, Human Rights, and Information Technology (co-edited with Michael Stein). His research has been funded by the National Science Foundation (U.S.), the National Institute on Disability Independent Living and Rehabilitation Research (U.S.), Google, Adobe, and the American Library Association. He regularly gives presentations at a diverse set of venues, spanning not only HCI and accessibility conferences, but also including the White House, Harvard Law School, the Korean Disability Law Association, and the Jacobus TenBroek Disability Law Symposium. He always works towards an interdisciplinary view of accessibility. While serving as a Fellow at the Radcliffe Institute for Advanced Study at Harvard University in 2012-2013, he participated in law classes on special education and disability rights, and did clinical observations at the Down Syndrome Clinic at Massachusetts General Hospital. These led to his later decision to take a leave of absence from his professorship during 2017-2018 and go back to earn an LLM degree at the University of Pennsylvania with a focus on disability rights law, so that he could increase the impact of his work.

Professor Lazar has pioneered new lines of accessibility research to specifically understand how accessibility research can inform policy and law. An example of this was when his research on discriminatory pricing towards blind airline passengers when websites are inaccessible, after being published, was cited in new U.S. federal regulations requiring web site accessibility for airline websites. Notably, Professor Lazar influenced the world of accessibility policy and law by serving as an expert consultant in the landmark National Federation of the Blind v. Target case in 2007-2008, the first legal case in the US where a judge ruled that web sites of public accommodations are covered under the Americans with Disabilities Act (ADA). He has also been involved in many other legal and policy efforts, most recently serving as an expert witness in legal cases to ensure that Blind voters can vote independently via accessible absentee ballot during the COVID-19 pandemic.

Professor Lazar has taught about accessibility in all of his classes, worked to connect students to the broader disability community, and he regularly takes his students to meet advocates and leaders in delivering accessible services to the public. He was an early advocate within ACM SIGCHI for making the conferences and digital publications more inclusive for researchers, practitioners, and students with disabilities. In the area of professional service, he has been on the executive board of the Friends of the Maryland Library for the Blind and Print Disabled since 2009, has been on the program committee of the ACM Conference on Accessible Computing (ASSETS) most years since 2006, and served as SIGCHI Adjunct Chair of Public Policy from 2010-2015 and Digital Accessibility Chair for the CHI 2014 conference.

Professor Lazar’s approach spans disciplines and communities, working with students, researchers, developers and practitioners, advocates, policymakers, lawyers, and others to make the world of digital technologies and content more accessible.

This article was originally posted to the iSchool website. Find the original article here. The original news release was posted by SIGACCESS on August 27, 2020.